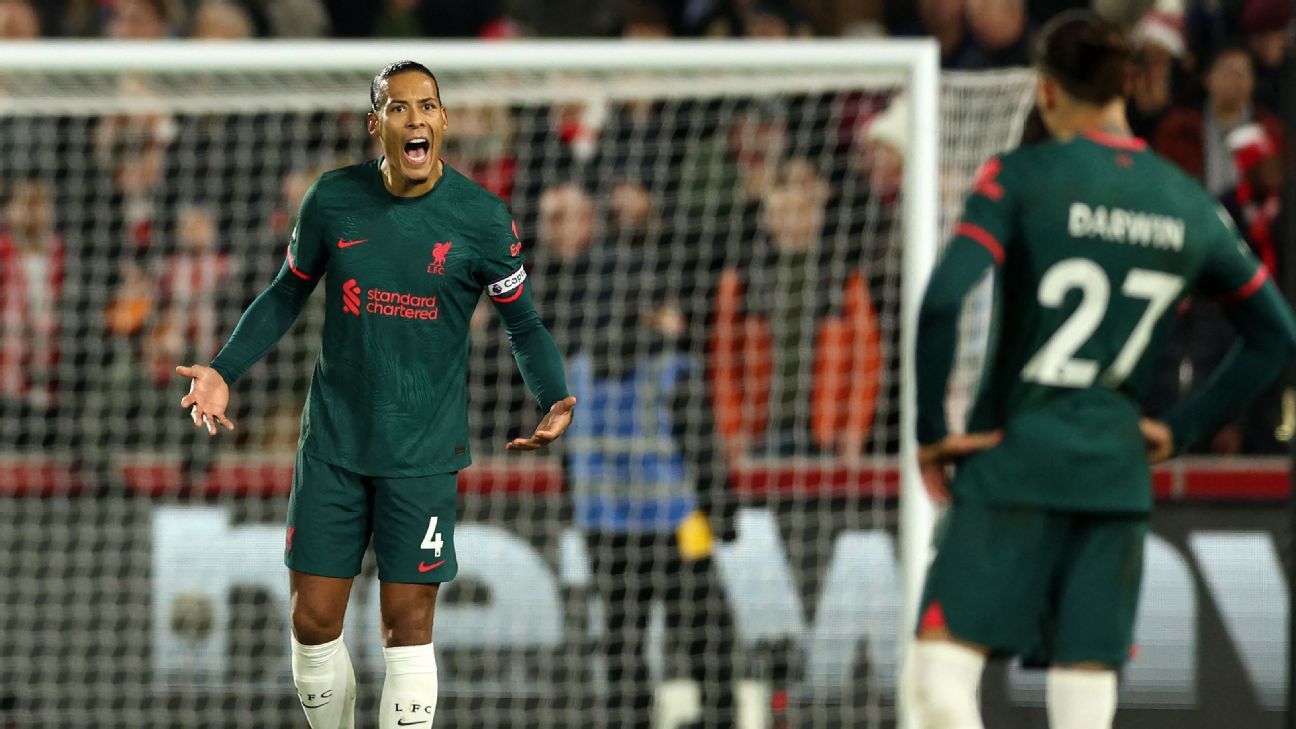 BRENTFORD, England — Brentford sealed their first victory over Liverpool since 1938 with a 3-1 win at Gtech Community Stadium on Monday, which dealt a fresh blow to the Reds’ hopes of a top-four finish in the Premier League to qualify for the Champions League.

Ibrahima Konate‘s 19th-minute own goal and Yoane Wissa‘s 42nd-minute header gave the home side a deserved lead as Liverpool made a dreadful start.

Although Liverpool improved after the restart, halving the deficit through Alex Oxlade-Chamberlain‘s first goal in almost a year on 50 minutes, they were unable to make their dominance in possession pay and Bryan Mbeumo sealed a famous win six minutes from full-time.

With the result, Liverpool finished the day 15 points adrift of first-place Arsenal in the Premier League and ahead of Brentford in sixth place.

A new year but an old feeling: another night when finishing in the top four just got a little harder for Liverpool.

The Reds keep making the task harder for themselves than needed — Monday was the 13th time in 26 matches across all competitions this season that they have conceded the first goal as part of a dreadful first-half performance.

Liverpool would have been eyeing up a chance to move past Tottenham into fifth place, but could they now fall seven points off the top four, depending on results elsewhere over the next few days.

It will place further pressure on both new signing Cody Gakpo to hit the ground running and the club in general to back Klopp further in the transfer market. The Liverpool boss has made it clear the club “cannot splash the cash” this month, particularly while new owners are sought and so answers may have to be found within. Gakpo, 23, will be expected to score goals.

The Reds did at least improve after half-time, but ending with 72.5% possession and just one goal was indicative of a team functioning well below par at both ends of the pitch.

2. Liverpool struggle with and without Van Dijk

Virgil van Dijk has long been the rock upon which Liverpool have founded their success but the usually assured Dutchman was way below his best here.

With Liverpool fortunate only to be 2-0 down at the break — two further goals were ruled out for offside — Klopp made a triple change which saw Joel Matip, Andy Robertson and Naby Keita replace Van Dijk, Harvey Elliott and Konstantinos Tsimikas.

Klopp probably would have changed all 11 if he could but the sight of Van Dijk being withdrawn was particularly striking, even if Klopp later insisted it was a precautionary change due to risk of injury. It was the first time Van Dijk had been taken off after 45 minutes since a pre-planned substitution in an EFL Cup tie against League One Lincoln City in September 2020.

Liverpool’s defending did improve some after the break, but Konate was beaten too easily by Mbeumo for Brentford‘s third goal.

Thomas Frank’s Brentford have scored nine goals from set pieces this season — the fourth-highest total in the division — but it was nevertheless alarming just how vulnerable Liverpool looked from both dead-ball situations. Even in open play, their high defensive line will once again be the focus of much criticism and concern.

Van Dijk’s positioning and decision-making are so often key in making that approach work and if there is any sort of World Cup hangover for the Reds’ skipper, Klopp needs it to disappear fast.

All the signs are that Liverpool‘s club-record £85 million signing for Darwin Nunez will eventually come good — but the wait is proving increasingly painful.

Ultimately, the catalogue of missed chances against Leicester City on Friday did not cost Klopp’s side as they went on to win regardless, but Brentford made them pay this time.

This game may have been very different had Nunez taken a golden chance in the eighth minute. Released by Mohamed Salah, Nunez rounded Brentford goalkeeper David Raya but saw his shot cleared off the line by Ben Mee. It was a brilliant piece of defending from Mee, in fairness, but indicative of Nunez’s recent travails in front of goal.

Nunez then thought he had scored his fifth Premier League goal when finishing smartly just after the restart, but VAR ruled the goal out on review for offside. After dragging another half-chance off target, the 23-year-old ended the night booked and on the losing side.

Nunez has all the attributes to thrive but players possessing such a price tag are afforded less time to start making an impact. Liverpool need him to deliver on his obvious potential sooner rather than later.

A constant menace with his runs in behind and sealed the win with a late third.

Looked completely shorn of his usual composure and hauled off by Klopp at half-time. Klopp later said the move was an injury precaution, but it might as well been based on his performance to that point.

Brentford‘s first goal wasn’t pretty — it was an own goal off the leg of Liverpool‘s Ibrahima Konate — but it counts all the same.

The ball hits Ben Mee then gets diverted by Konate for the own goal.

Brentford kept pushing for goal, eventually having two would-be goals pulled back for offside in the first half.

But Yoane Wissa found a way to double Brentford’s lead, although it took goal-line technology to recognize it as a goal.

The first half ended with Brentford having clearly been the better side. The teams finished the half with Brentford at 1.60 expected goals (a measure of the quality of scoring opportunities) and Liverpool at 1.25 xG.

Liverpool came out of the break swinging, however. Darwin Nunez had a goal called offside in the opening three minutes of the second half, and then Alex Oxlade-Chamberlain scored in the 50th minute.

A beauty by @LFC to cut the lead.

But Liverpool would cool off considerably after the goal, eventually conceding once more to Brentford’s Bryan Mbeumo and failing to score one of their own for a 3-1 finish.

After the match: What the players and managers said

Brentford forward Yoane Wissa: “I hope the fans enjoyed it. We worked so hard, and it’s because together — we stay together and that’s why we have this result.”

Liverpool defender Andy Robertson on the first half: “First half, we were nowhere near good enough — everything we worked on, everything we’ve done. They were first to second balls, we gave away cheap set pieces. We knew they were a set-piece team, really good at corners, makes it really difficult. We have to be so much more aggressive in the air — so much more aggressive when the ball comes into the box and unfortunate we didn’t do that.”

Robertson on the result: “I don’t think any complaints can be about the result. They deserved to win. They played the better football, especially in the first half, and that’s why you get a result like this.”