People relying on the state pension could be left with less than £11 a day to live on from next April because of the soaring cost of energy, according to Sky News analysis.

A leading charity working with older people said it is “seriously worried” and called on the government to step in urgently.

According to Sky News analysis the full state pension is likely to rise to £10,600 from April next year, if inflation remains at 10.1% in September when rates are fixed for 2023-24.

But the consultancy group Cornwall Insight predicts the typical energy bill will also soar in April to £6,616.

That would mean gas and electricity costs would account for 62% of the state pension, leaving older people with just £10.92 a day for food, transport and other essential living costs.

Independent Age, which provides advice and support to older people, said: “We’re seeing more and more calls every day to our helpline from people who are just desperate, who really don’t have any idea how they’re going to pay their bills in the autumn and winter.

“They are talking to us about things like switching their fridge off overnight to try and save electricity.

“We’re seriously worried. It’s going to be devastating for a lot of people.”

The full “new” state pension is paid to people who have reached retirement age since April 2016. 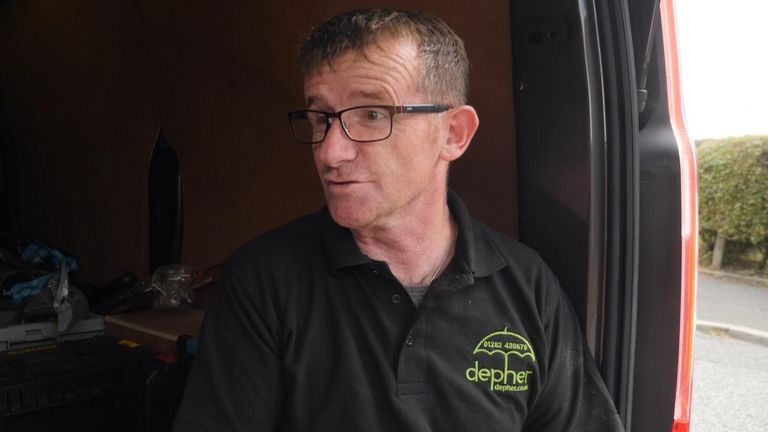 ‘People will suffer and die’ this winter

People who reached retirement age before then receive a basic state pension, which is topped up based on lifetime National Insurance contributions.

Under the triple-lock, both the basic and full state pensions increase by the highest rate of inflation, wage growth or 2.5%. The amount for 2023-24 will be set by next month’s inflation rate.

But inflation is expected to continue rising over the winter, reaching 18.6% in the spring, according to financial services company Citigroup, far outpacing the pension increase.

Energy prices will go up even faster.

New analysis by the University of York given to Sky News shows that pensioners and larger families will be hardest hit by the rise in energy costs, with 90% expected to be in fuel poverty by January.

Tony O’Brien worked in an office for 40-odd years and managed to put away a little in savings when times were good. But even that’s not enough to give him the retirement he was hoping for.

“I mean, I could get a second job, but it might well kill me,” he said.

“I’ve got health issues, diabetes and various injuries from over the years with the back and knees, so it wouldn’t be easy for me to get another job.

“It would be possible, but would probably shorten my existence.”

The 4.5 million people fortunate enough to be retiring on private sector pensions are likely to see incomes drop, with a potential hit of £25,000 over their lifetimes because of the soaring living costs.

The XPS pensions group warns that annual inflationary rises in defined benefit pension schemes, which are common in the private sector, are typically capped at 5%, a third of the expected inflation rate.

That would mean the average 66-year-old retiree on a private sector pension could miss out on £1,200 a year, XPS said.

Public sector workers are unaffected because their schemes do not have caps on inflation rises.

Writing in the Mail on Sunday, Boris Johnson said the cost of heating is already “frightening” and future rises in bills will be “eye-watering”.

He has been criticised for failing to outline further support, but said his successor will deliver significant measures.

The frontrunner to be the next prime minister, Liz Truss, is reportedly considering a cut in VAT of 5% and allowing people to earn more before paying income tax.

But neither she nor Rishi Sunak have given any public details of how they will help people cope with the spiralling crisis.