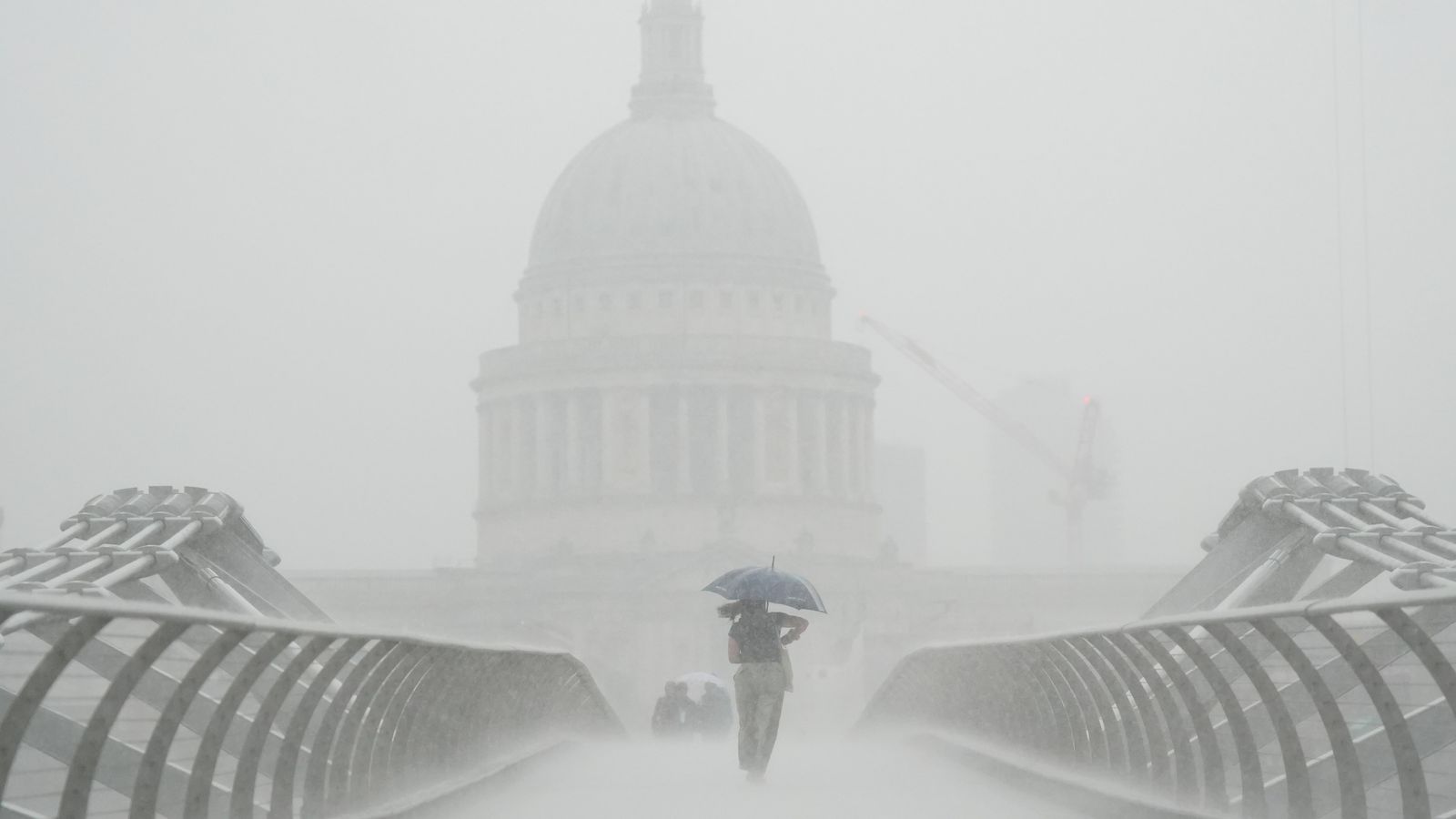 Floods have left homes, businesses and streets under water in parts of the UK, as thunderstorms continue to batter the country.

Thunderstorms continue around the country, and downpours caused flooding inside London’s Victoria Station and outside King’s Cross Station, with videos showing cars and buses driving through huge puddles.

Network Rail said: “Not long after 3pm this afternoon, station colleagues at London Victoria noticed flooding at the main entrance due to heavy rainfall, with large volumes of water running down the slope leading towards the eastern concourse.

“Some retail units and platforms had to be closed.”

An amber thunderstorm warning covering most of the southeast of England, including parts of London, was in place until 10pm, warning people that they should expect flooding and disruption.

The Met Office said flooding is likely to affect homes and businesses “quickly”, as 30mm to 50mm of rain could fall in just an hour, while a few places may see more than 100mm in a few hours.

Lightning, hail and strong winds were also expected to lash areas included in the warning, such as Suffolk, Kent, Surrey and West Sussex.

Downpours had hit the country earlier in the day, with the gym in the Houses of Parliament flooded out.

As the evening rush hour began, Sadiq Khan, the London mayor, said parts of the capital and of its transport network “are currently experiencing disruption due to thunderstorms and flash flooding”.

Parts of the UK have already faced two days of heavy rainfall and flooding, and a yellow thunderstorm warning has been in place across most of southern England, Wales and central areas, including the Midlands.

The Environment Agency has urged people not to drive through flood water, warning that it is “often deeper than it looks and just 30cm of flowing water is enough to float your car”

A hospital, an airport and an eight-foot-wide sinkhole

In Yorkshire, Doncaster and Bassetlaw Teaching Hospitals NHS Foundation Trust has asked people only to attend its A&E if their condition is urgent or life-threatening after water leaked into its building.

Gatwick Airport warned the weather conditions could cause flight delays.

It tweeted: “Air traffic control restrictions are currently in place across the South of England and parts of Europe due to poor weather conditions.

“This will unfortunately cause delays and cancellations to some flights today.”

In Nottinghamshire, the local county council said that at least 30 homes and business premises in its region were hit by bad weather and an eight-foot-wide sinkhole had been reported to have appeared in a car park.

In Hackney, east London, local officials warned residents that “severe flooding” meant they should Stoke Newington and said they were working to clear drains and hand out sandbags.

Pollution warnings have been put in place at more than 40 beaches and swimming spots in England and Wales.

The southwest and south coast of England were the worst affected, according to data gathered by environmental campaign group Surfers Against Sewage.

Swimmers have been advised to avoid bathing at seven beaches in Cornwall as a result of storm sewage overflows, with four in Devon and five in Dorset also polluted.

Read more:
It finally rained! But what caused that strange smell?

Nine beaches in Sussex, three on the Isle of Wight and three in Essex have also been affected.

Elsewhere, there were warnings in place at spots in Lincolnshire, Cumbria, Lancashire and South Wales, as well as two inland wild swimming spots near Bristol and near Minehead in Somerset.

In recent years, there has been growing public outrage at the volume of raw or partially treated sewage pumped into the UK’s rivers and coastal waters.

‘Biggest tax cuts for 50 years’ as chancellor wields knife in mini-budget
Zelenskyy calls on the UN for ‘just punishment’ over Russia’s invasion of Ukraine
Apple’s new AirPods Pro are worth the $249 even if you already own the older version
ONYX CTY2 e-bike with 60 miles of range returns to all-time low at $3,500 in New Green Deals
Keir Starmer says he will reverse tax cut for top earners if he wins next election