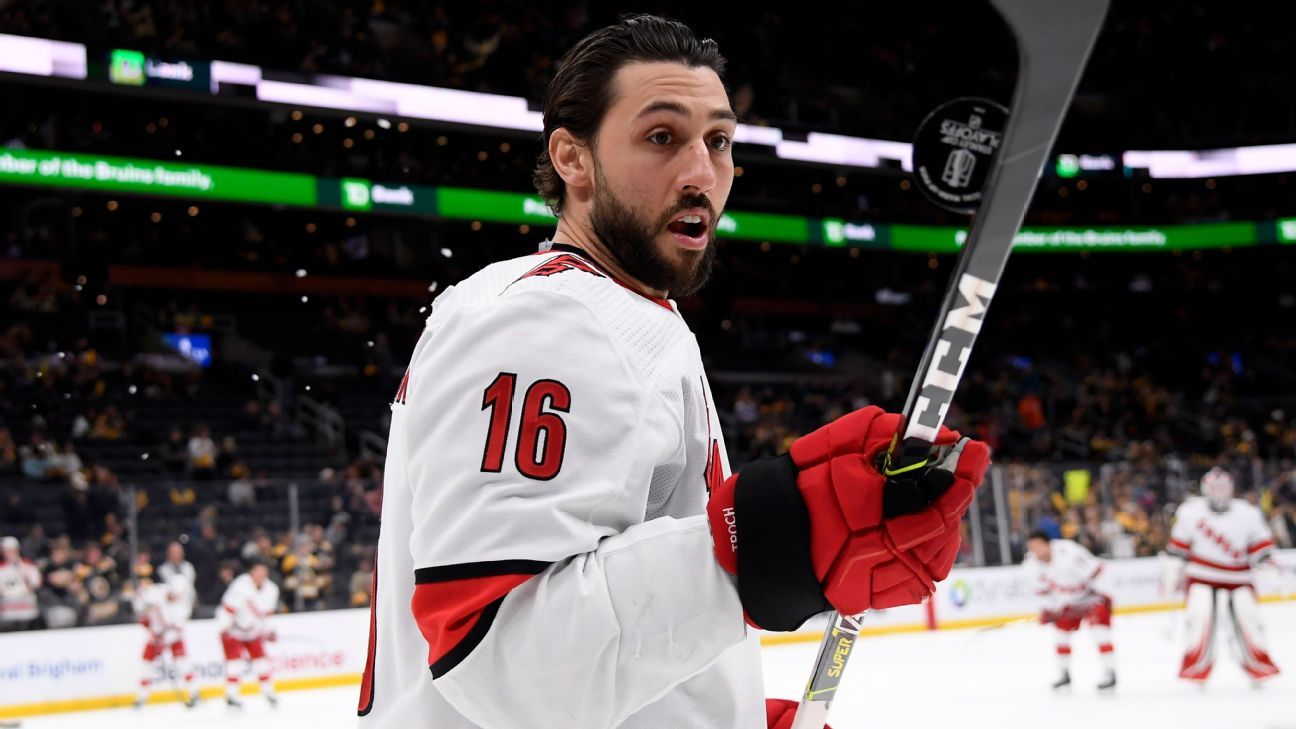 The NHL free agency signing period for 2022 is underway.

For each key deal, ESPN NHL reporters Greg Wyshynski and Kristen Shilton will assess the player’s fit with his new team, weigh whether the terms of the deal make sense and hand out an overall grade for the team.

We’ll continue to grade the most notable moves through the offseason, so check back for fresh grades as deals are consummated; the newest grades will be listed first.

Where does he fit: The Washington Capitals have been chasing a true starting goalie ever since moving on from Braden Holtby in 2020. They hoped either Ilya Samsonov or Vitek Vanecek could become one. They attempted to bring in Henrik Lundqvist before a heart condition ended his NHL career. But after last season, when the Capitals were 23rd in team save percentage (.898), they decided to go all-in on finding a true starter, and that starter was Kuemper, who appeared in 57 games for the Colorado Avalanche last season.

The Capitals sent Vanecek to the New Jersey Devils. They walked away from restricted free agent Samsonov, who signed with the Toronto Maple Leafs. Whatever they would have paid them was instead handed to Kuemper, securing the services of a goalie who is a few weeks removed from being mobbed by teammates after winning the Stanley Cup.

Does it make sense? Scanning the goalie market, it makes a lot of sense. Kuemper was the only true starting goalie on the unrestricted free agent market — Jack Campbell and Ville Husso were both tandem netminders. For what the Capitals needed, Kuemper was the guy.

Kuemper did what he needed to do in the playoffs for the Avalanche: He didn’t lose them the games they needed to win. He was also outstanding in the second half of the regular season after getting his bearings in a new market, with 30.4 goals saved above average and 5.3 wins added to the Avalanche. There’s no question that he’s in the upper echelon of NHL goaltenders — in the 96th percentile in WAR over the past three seasons — but some of his underlying numbers reveal below-average rebound control and low danger save percentage.

He’s an upgrade over what the Capitals had, but Washington is a downgrade compared to what was in front of Kuemper in Colorado. But hey, the guy used to star playing behind the Arizona Coyotes. He’ll be OK.

Grade: A-. Look around the NHL. Look at some of the scrambling, desperate moves that were made by teams hoping that a backup goalie could become a starter or that an oft-injured goalie suddenly could find stability. To find an established starter with Kuemper’s numbers — let alone one who just helped his team win the Cup — and get him without having to surrender a player or a draft pick is a coup for the Capitals.

Age is an issue. Kuemper is 32. In the short term, he’ll be able to shoulder most of the workload. Toward the end of this deal, he’ll need a little more help. But the Capitals are still a team of now rather than later, and Kuemper certainly makes them more competitive. — Greg Wyshynski

Where does he fit: Right next to Artemi Panarin in the Rangers’ top six. That’s where Ryan Strome played during his four years with the Rangers before they let him walk to unrestricted free agency. That’s where New York expected Andrew Copp could play when it acquired him at the trade deadline from the Winnipeg Jets, but Copp opted to test the open market and found a new home with the Detroit Red Wings.

That opened the door at center in New York for a free agent acquisition. The Rangers were in the mix for Colorado Avalanche star Nazem Kadri, but opted for a younger (29) and more thrifty option in Trocheck, who spent the past three seasons with the Carolina Hurricanes.

Does it make sense? Committing seven years to a second-line center never really makes sense, but that’s what the Rangers needed to do to get Trocheck in at $5.625 million, making him the fourth-highest-paid forward on the team. The Rangers now have Mika Zibanejad and Trocheck both signed through 2029. Now that’s stability.

Trocheck can bring some flashy playmaking to the middle of the ice and has been a strong special teams player during his career. Strome is a better finisher than Trocheck, but Trocheck brings a bigger bag of tools to the mix.

Grade: B. The deal’s term is coin of the realm in order to get a solid cap hit for one of the more coveted centers on the open market. Coach Gerard Gallant knows him well. If he can get Trocheck back to the form he showed in Florida, when he was considered one of the NHL’s most underrated offensive players, this could look pretty good. Well, for at least the first few seasons. — Wyshynski

Where does he fit: Wherever the Red Wings need him to fit, to be honest. The true value of Andrew Copp is that he’s a Swiss Army knife of a forward. The Winnipeg Jets cast him as a defensive forward and played him up the lineup with their stars. The Rangers played him up with Artemi Panarin and Ryan Strome.

The Red Wings likely see Copp as a second-line center behind Dylan Larkin, which could have him playing with the likes of Jakub Vrana and Filip Zadina for new head coach Derek Lalonde.

Does it make sense? Absolutely. When the Rangers acquired Copp from the Jets at the trade deadline, the assumption was that he would move into Strome’s spot next to Panarin on a new contract. But the Rangers had someone else in mind — Vincent Trocheck — and let Copp walk to free agency.

Their loss is the Red Wings’ gain. Copp’s versatility makes him an asset for a team that is still trying to see where the young pieces fit in their lineup. He’s not the strongest finisher, but he’s got a decent shot. He’s a good passer if not a great playmaker. Even if his offensive numbers fade by Year 5 of this deal, he does so much more for a team that it’s a worthy investment.

Grade: A-. Once upon a time, the Red Wings signed a free agent named Frans Nielsen to a six-year contract worth $5.25 million annually. That contract … did not work out. There are echoes of that signing in bringing on Copp, who is another underrated forward who will be asked to build on the offensive promise of his 53 points in 72 games this past season. I don’t believe history will repeat itself here, as Copp is hitting his stride as an offensive player. Plus Nielsen arrived as Detroit’s kingdom was crumbling, while Copp arrives as the Wings are trending back up. — Wyshynski

Where does he fit: Giroux can slide in just about anywhere for the Senators, one of many reasons coach D.J. Smith is going to love having him in the fold.

The 34-year-old projects to start on a line with Tim Stutzle and Ottawa’s newly acquired prize Alex DeBrincat. That’s a formidable top-six unit for the Senators to roll out. But with Giroux’s versatility, he could be used in a checking role as well if called upon. And he’s coming off a terrific season — 21 goals and 65 points in 75 games.

Does it make sense? Without question. And that’s on and off the ice.

Giroux grew up near Ottawa and has made his offseason home in the area. The Senators have struggled to attract — and keep — star players in the past, and now one of the most coveted free agents on the market is choosing to play the last years of his great career there. It’s a much-needed boost of confidence for Ottawa.

The Senators have a stable of young talent that will benefit from being around one of the NHL’s most respected leaders. Stutzle, Josh Norris, Shane Pinto and others will have the ultimate sounding board and mentor in Giroux (who captained the Philadelphia Flyers from 2013 until he left for Florida in free agency last spring).

Giroux’s decision to waive his no-move clause in March to chase a Stanley Cup championship with the Panthers didn’t pan out as planned. But the Senators can benefit from his nearly 100 games of postseason experience if they’re able to finally get back into the postseason picture.

Grade: B-plus. A three-year deal for a 34-year-old is a bit risky. But Giroux is worth it. He’s going into Ottawa knowing the Sens won’t compete for a Cup this season, but it’s not out of the question they’ll be back as a playoff team. Giroux will help there, having proved last season that he’s far from over the hill. Knowing how much he’ll impact the franchise’s foundational pieces only sweetens the deal. Giroux is a home run acquisition for the Senators. — Kristen Shilton