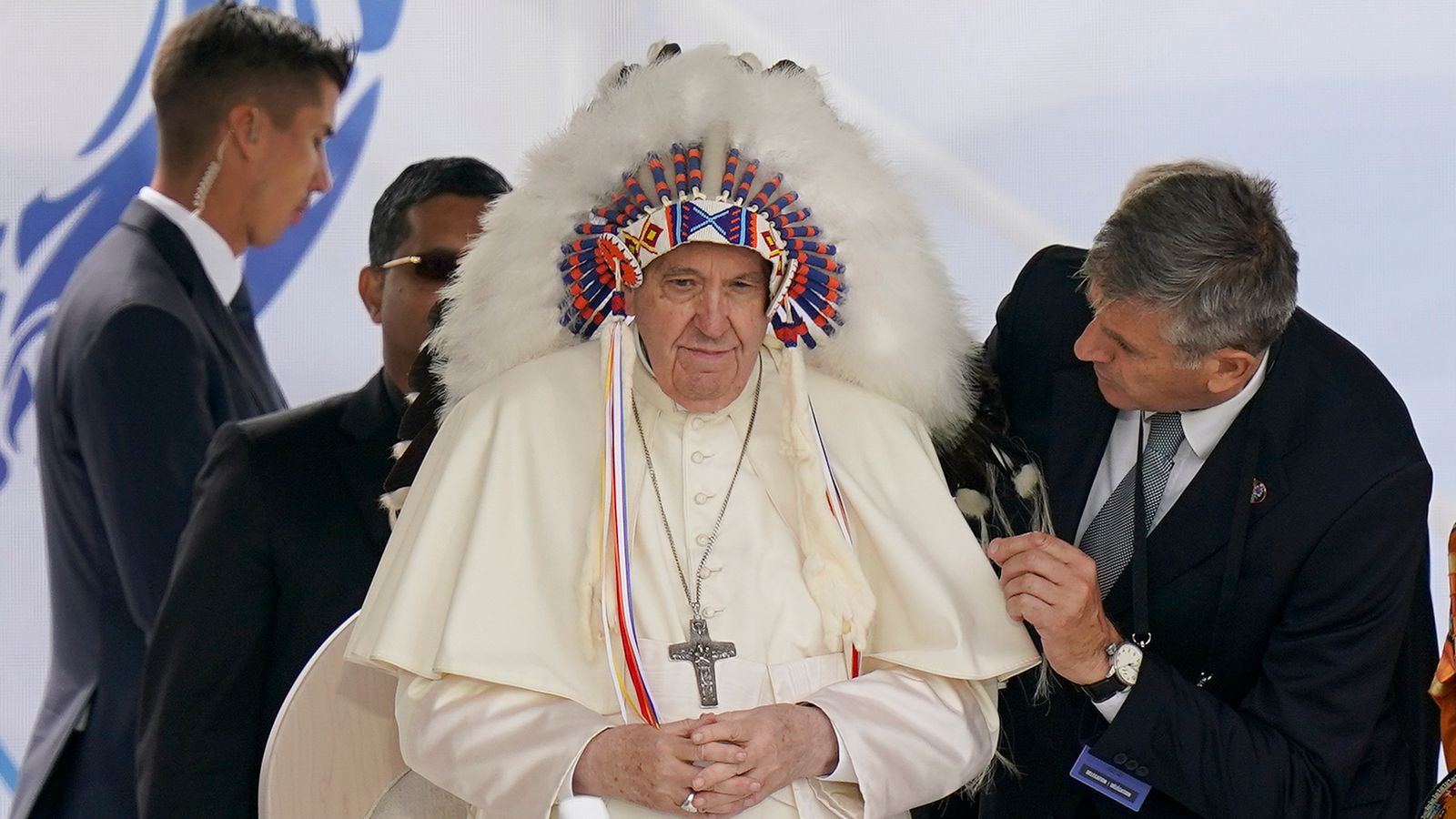 The pope donned an indigenous feathered headdress as he visited Canada to apologise for the Catholic Church’s roles in schools where indigenous children were abused.

Pope Francis said the forced assimilation of native peoples into Christian society destroyed their cultures, severed their families and marginalised generations in ways which are still being felt today.

“I am sorry,” the pontiff told school survivors and indigenous community members gathered at a former residential school south of Edmonton, Alberta.

He apologised for Christian support of the “colonising mentality” of the times and called for a “serious” investigation into the schools to help survivors and descendants heal.

“With shame and unambiguously, I humbly beg forgiveness for the evil committed by so many Christians against the indigenous peoples,” said Francis.

On Monday the pontiff travelled to the lands of four Cree nations to pray at a ceremony. Four chiefs then escorted him in his wheelchair to powwow ceremonial grounds where he delivered the apology and was given a feathered headdress.

More than 150,000 native children in Canada were forced to attend state-funded Christian schools from the 19th century until the 1970s in an effort to isolate them from the influence of their homes and cultures.

The aim was to “Christianise” and assimilate them into mainstream society.

The Canadian government has admitted physical and sexual abuse was rampant at the schools, where students were beaten for speaking their native languages.

The legacy of the abuse and isolation from family has been cited by indigenous leaders as a root cause of the epidemic rates of alcohol and drug addiction on Canadian reservations.

Despite the sombre occasion, the 85-year-old pope had some fun when he asked a Vatican aide to push his wheelchair close to people waiting outside the Sacred Heart Church of the First Peoples in Edmonton, the capital of Alberta.

He told the aide to push his wheelchair between the cars of a waiting police motorcade and close to the crowd behind the fence.

At one point his aide had to lower the wheelchair backwards to manoeuvre it from the pavement to the street, putting the pope at a 45-degree angle facing the sky.

People behind the fences cheered and put their hands through the wiring in the hopes of touching him.

The discoveries of hundreds of potential burial sites at former schools over the past year drew international attention to the legacy of the schools in Canada and their counterparts in the United States.

It prompted Francis to comply with the truth commission’s call for him to apologise on Canadian soil for the Catholic Church’s role. Catholic religious orders operated 66 of the 139 schools in Canada.

The Vatican had resisted calls for an apology from the pope for years.

Liz Truss ‘misinterpreted’ over ‘no handouts’ remark, her supporters say
Genetic Evidence of Typhoid and Plague Causing Pathogens Found in DNA of Ancient Civilisations
Rail passengers facing more disruption as train drivers announce strike on busy weekend
Elon Musk challenges Twitter CEO Parag Agrawal to a debate on bots
Why has the FBI raided Trump’s estate – and what are they investigating?