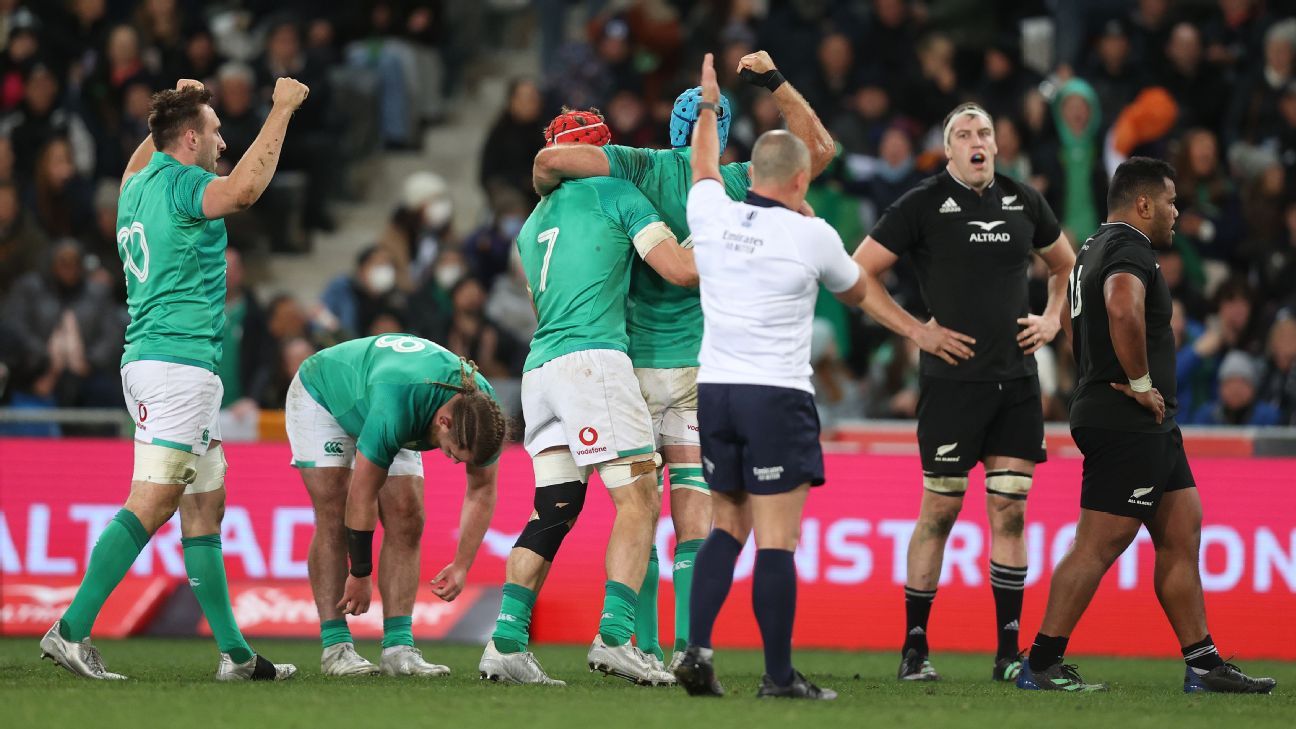 Amid all the drama, debate and exploding outrage about the state of the game — or at least the way in which it is being officiated right now — never before in the professional era have we seen a slate of July Test series so keenly contested across the world.

And they come within the wider context of the potential reimagining of the global calendar. That, however, has proved problematic in the past – and is every chance to do so again.

For now, though, it’s worth cherishing the current situation – that there are four trophies on the line this weekend.

And a unique script for each contest, spread across their four separate southern hemisphere venues.

Let’s start in New Zealand where for the first time in history the All Blacks are staring down a series defeat to Ireland. Andy Farrell’s side created history last week in Dunedin by becoming the first Ireland team to win a Test in New Zealand, but an ever greater achievement is in the offing in Wellington.

Ireland have now won three of their last five against New Zealand, but a victory this weekend would prove a red-letter day for the Emerald Isle and complete a 3-2 overall touring return when you factor in Tuesday’s night win over the Maori All Blacks.

The All Blacks, conversely, find themselves at arguably their lowest ebb – certainly fourth is the lowest position New Zealand has ever featured on World Rugby’s Test rankings.

Parts of the country’s media are gunning for Ian Foster’s head with the ever present Scott Robertson waiting in the wings should the almost unthinkable happen and the All Blacks slip to a home series defeat to a northern hemisphere nation.

At the crux of the contention around Foster’s position is that he is the owner of the worst record of any All Blacks coach of the professional era. A 69.57% return would be acceptable for just about any other rugby coach on the planet but it is unpalatable in a country so accustomed to success, particularly when you consider that Foster has recorded losses to each of Argentina, Australia, Ireland, France and South Africa across his three-year tenure – and is yet to face England.

Sure, his predecessors Graham Henry and Steve Hansen suffered defeats along their way to Rugby World Cup triumphs, but the All Blacks never appeared so beatable as they do right now.

To the east of the Tasman, England coach Eddie Jones has had his share of criticism in recent months, which is why last Saturday’s win over the Wallabies in Brisbane was so important. In building a 19-0 lead inside the half-hour mark at Suncorp Stadium, England looked a lot like the team that humbled the All Blacks in the 2019 World Cup semifinals.

But in allowing Australia back into the contest — the Wallabies closed the gap to just five points midway through the second half — the questions that have plagued Jones in recent months began to bubble away beneath the surface once more.

Yet the Australian finds himself in the enviable position to become the first coach to lead a northern hemisphere nation to back-to-back series triumphs in Australia.

And Jones continues to play the pantomime villain perfectly, this week drafting in Christian Poidevin, the son of Wallabies great Simon, to assist with England’s training this week. It’s enough to make the already surging blood pressure of the average Australian rugby fan boil over completely.

Meanwhile, there’s no understating just how badly the Wallabies need to win Saturday night’s decider, which may well prove to be the last ever rugby Test played at the Sydney Cricket Ground.

A 2-1 series triumph against England could prove the kickstarter for a team that, apart from four straight wins on home soil in last year’s Rugby Championship, is still searching for that genuine confidence and consistency under Dave Rennie that would make them a genuine threat at next year’s World Cup.

Riddled by injury, with no less than 11 players having either suffered concussion or having succumbed to other complaints, the Wallabies have had to call for reinforcements from the Australia A program and, in the form of Lukhan Salakaia-Loto, Brisbane club rugby.

Rennie spoke of his team’s “character” following their 14-man win over England in Perth – the Wallabies are going to need more of the same again to bounce back from their loss in Brisbane.

Win and they will enter a Rugby Championship campaign, that for once doesn’t start against the All Blacks, on a high. But lose and a trip to Argentina to face former coach Michael Cheika and the Pumas, suddenly doesn’t look so inviting.

The prospect of defeat is made even more depressing knowing the sheer delight it would bring Jones.

While rugby history was first created in Dunedin last week, it continued later that day in Bloemfontein where Wales recorded a maiden Test victory in South Africa thanks to Gareth Anscombe’s sideline conversion.

For a team that suffered the indignity of a home defeat by Italy, who had not won a Six Nations match in 37 games, earlier this year, Wales’ 13-12 victory was as extraordinary as it was gutsy – even if it came against a Springboks team that had made 14 changes to its starting side from the first Test.

That, too, was a game Wales could, and in some ways should, have also won. Yet they still find themselves with the opportunity to record a series triumph in the Republic, which would be their first away to any of the southern hemisphere’s big three.

Standing opposite is a wounded Springboks team that could point to the wholesale changes it made as a reason for the defeat in Bloemfontein, but one still smarting from a result they still never expected to record.

Jacques Nienaber has named a run-on team with 11 changes to the one beaten last week, a team that on Saturday has the extra motivation in winning a Test that is the veteran lock’s Eben Etzebeth’s 100th.

And wrapping up the weekend’s series deciders are Argentina and Scotland, who will meet in Santiago del Estero to close out their own cross-hemisphere battle.

The visitors hit their straps in a second-half onslaught that brought three tries to square the series last week, leaving Cheika and the Pumas with plenty to ponder as they chase a rare piece of Test silverware.

Away on tour without skipper Stuart Hogg and star playmaker Finn Russell, a series victory on foreign soil would be a huge result for Gregor Townsend’s team who have shown they can mix it with the likes of England and France, but still lack the consistency to be rated genuine World Cup contenders.

Still, all four of Saturday’s Tests reflect the current competition at the top of international rugby.

The game has its problems, no doubt. But as coaches, players, officials and fans alike are split over issues such as high contact, foul play, the use of yellow and red cards and their associated suspensions, the overreach of the Television Match Official and the long deplored deliberate knockdown law, the fact that all four series are in play is cause for celebration.

And it paves the way for potentially the most unpredictable Rugby World Cup to date, while also offering pause for thought that a Nations Championship, of sorts, might not be the best way forward for international rugby.

For while it may indeed bring vast new revenue streams to a game searching for every dollar it can muster, there is something special about a three-Test series – and we have never before had a line-up like the one to come this weekend.

And having wrapped up their two-Test tour of Japan, and ascended to top spot on the rankings, France can sit back, relax, buoyed by the knowledge that the world comes to their doorstep in 14 months’ time.

This article was originally published by Espn.co.uk. Read the original article here.