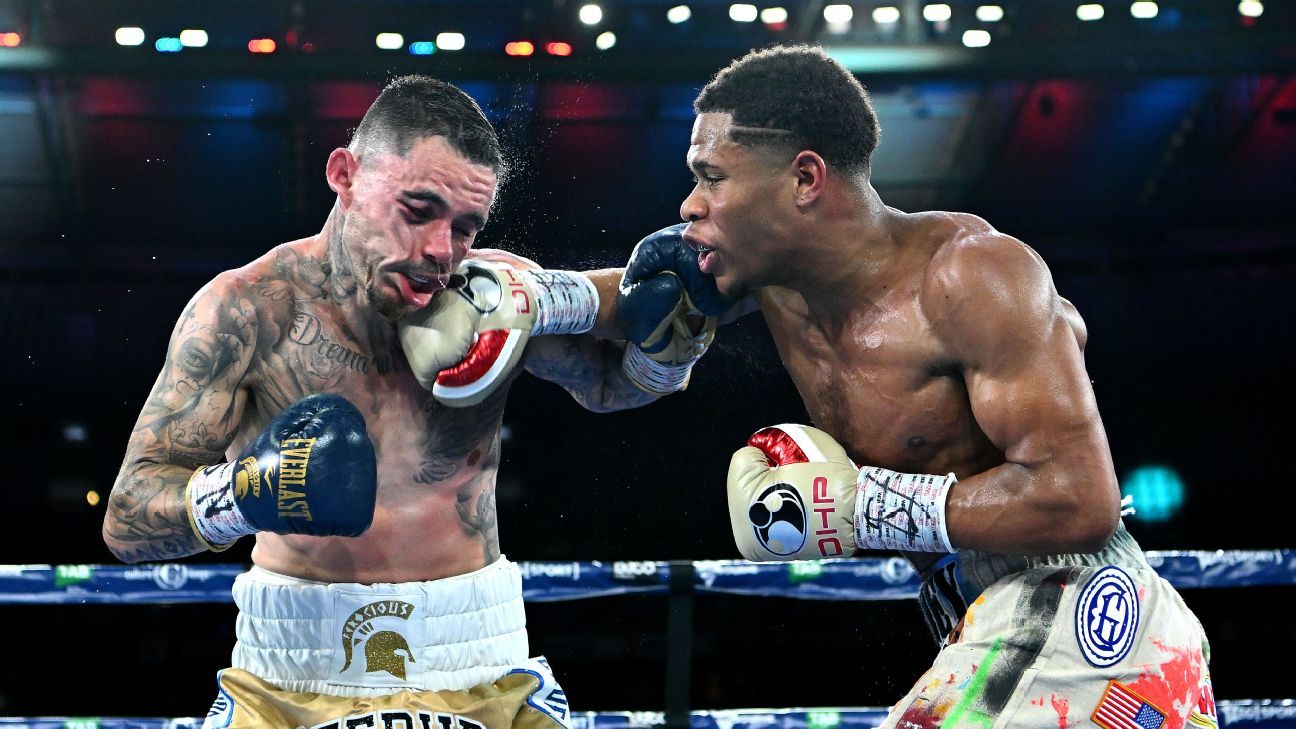 “Ain’t gonna be no rematch.”

That exchange between Apollo Creed and Rocky Balboa, whom Creed defeated in the first installment of the classic film series, seems apt after Devin Haney dominated George Kambosos Jr. over 12 rounds in Melbourne, Australia, on Saturday night (Sunday afternoon in Australia) to capture the undisputed lightweight championship.

Really, what else is there to see? It’s not like Kambosos possesses soul-crushing power or simply had an off night. It’s just hard to picture what Kambosos can do differently after watching 12 mostly noncompetitive rounds in his home country. The two 116-112 scorecards don’t accurately portray the fight. The third was 118-110.

But it’s overwhelmingly likely Haney (28-0, 15 KOs) and Kambosos do run it back. After all, Kambosos (20-1, 10 KOs) called the shots as champion, and Haney acquiesced to land the opportunity. The deal included a rematch clause that, if exercised, guarantees Kambosos a return encounter later this year, also in Australia.

“Yes, 100% … we’ll do it again,” Kambosos said when asked if he would exercise the rematch clause. “Look, I gave him the shot. If I hadn’t given him this shot, he wouldn’t have had his moment right now.

“He grabbed and held a lot and did what he had to do to win. That’s what it’s about. You do what you have to do to win, and today they gave him the decision, but I’m sure it will change when we get it on again. … This is going to make me hungrier.”

There’s no doubt Kambosos believes those words. It’s hard to doubt the 28-year-old’s steely resolve after he did exactly what he swore he would do against Teofimo Lopez in November to collect four lightweight titles.

Kambosos scored a knockdown in the opening round of that bout — ESPN’s upset of the year — to announce his arrival on the world stage.

But after 12 rounds against Haney, a fighter with a far different style than Lopez, there won’t be much thirst from the public for a rematch. And why should there be?

The fight, to put it politely, was tactical throughout its entirety. Haney boxed brilliantly and used his excellent jab to offset Kambosos’ power shots. The strategy was executed to perfection. Haney never took any risks, instead electing to box and move, and stick the jab to the body and head.

Rarely did a power punch connect from either boxer. According to CompuBox, Haney landed 69 power shots to 68 from Kambosos. There wasn’t a shred of drama in the fight, not a single moment where it appeared Kambosos might win.

That’s not to say he doesn’t deserve a rematch. As Kambosos pointed out, Haney received the opportunity only because Kambosos gave it to him. Surely, Kambosos could have picked any number of far easier opponents for a homecoming title defense.

Instead, he decided to seek out the toughest challenge available. And that means we’re almost certainly going to see 12 more rounds between Kambosos and Haney.

“I’m not ducking or dodging nobody,” said Haney, 23. “If it makes sense, if the network wants it, I’ll do it again. But it has to make sense.”

It doesn’t make all that much sense, but the contract supersedes all. Haney’s only real avenue to a fight with a different opponent is to vacate the four 135-pound titles he won and move up to 140 pounds.

So instead of potential fights with Ryan Garcia or Gervonta Davis, Haney can look forward to one more bout with Kambosos. Another victory by Haney will send them on their separate ways.

The unnecessary rematch is a staple of boxing, a sport where the champion or A-side wields a tremendous amount of power. Look no further than the upcoming rematch between Oleksandr Usyk and Anthony Joshua for the unified heavyweight championship. Joshua entered the first bout with three titles but was soundly dominated and almost stopped by Usyk.

Of course, Joshua had the rematch clause to fall back on. And true champions always believe they can find a way to extract revenge. And that’s exactly the way Kambosos feels in the immediate aftermath. After all, the odds were stacked against him when he challenged Lopez last year.

Perhaps cooler heads will prevail and Kambosos will at least agree to allow an interim title bout before he meets Haney again, but it doesn’t appear all that likely.

“I have to implement a few things, but I thought the fight was very close,” said Kambosos. “He moved. He boxed. He didn’t really want to come into the fight too much, but that’s his game, so I give him respect. I’m going to change a few things and get him back at the end of this year.

“I take the risks. I fight the best in the business. At the end of the day, I didn’t have to fight him. Not many wanted to fight him. But I gave him the shot right away, so I’m sure we’ll do it again.”

We’re adding four stocks to our Bullpen, including Starbucks and Airbnb
The Tory leadership race might seem a foregone conclusion but it’s much more complicated than that
Triple blow to earnings leaves some low-income families £1,600 worse off, even after govt support
Truss refuses request to apologise over public sector pay policy U-turn
Bumper US jobs report defies surging inflation and recession fears