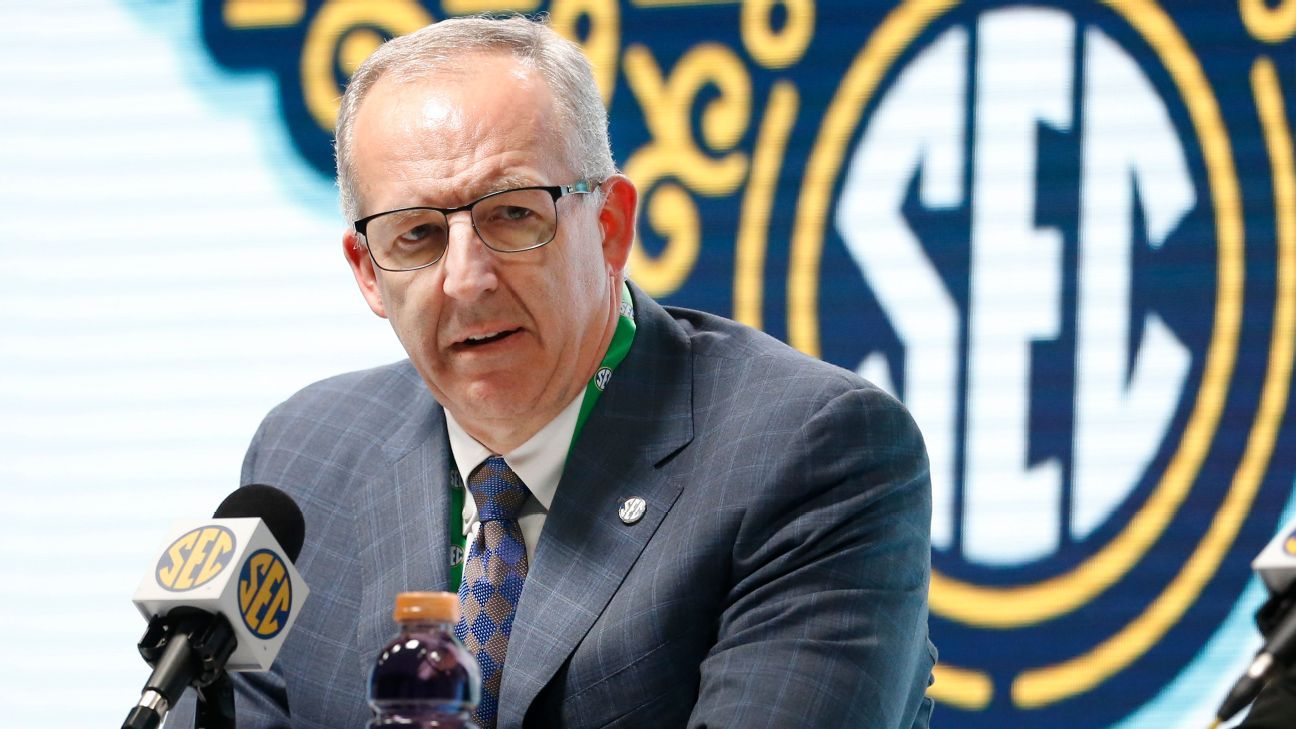 There’s a consistent myopia that’s led college athletics down a wayward path for generations. It’s a familiar pattern that spiraled the industry to its current state.

Leaders wait until problems manifest and then scramble for eleventh-hour solutions. They muster enough administrative muscle to spit out some type of temporary bubble-gum resolution to stick in the dam. Then they exhale when a flood is avoided, look away and don’t notice the water gushing elsewhere. The cycle repeats itself over and over.

So here we are with the latest self-manufactured college athletics emergency — name, image and likeness enforcement. Or lack of enforcement. Which came after NIL’s shotgun introduction less than a year ago. Sound familiar?

Administrators gathered last week at a series of meetings built around a Scottsdale boondoggle — made famous by a Fiesta Bowl executive turned felon — and tripped over themselves to voice the most outrage at a problem their own apathy created.

The dam is breaking, they screamed again. Let’s get a subcommittee together for a temporary solution that won’t last long enough to pacify everyone until next year’s boondoggle. Many even acknowledged it probably wouldn’t work. Outrage for everyone! Find the bubble gum!

This pattern is as predictable as it is dispiriting. Especially because the real issues that the sport’s leaders should be worried about — the kind that have billions at stake, not millions — loom much larger.

College athletics needs revolution, not the same incremental and ineffective evolution. Leaders should stop legislating to satisfy the complaints of the now and start envisioning what college athletics should actually look like in the next generation. Then start moving and leading toward that vision. And it’s one that should involve much less of the NCAA.

Last June, the Supreme Court laid bare the NCAA’s hypocrisy in the Alston ruling, which held that the NCAA was violating antitrust law by placing limits on the education-related benefits that schools can provide to athletes.

“The NCAA is not above the law,” Justice Brett Kavanaugh wrote in a concurring opinion. “The NCAA couches its arguments for not paying student athletes in innocuous labels. But the labels cannot disguise the reality: The NCAA’s business model would be flatly illegal in almost any other industry in America.”

The ruling also gave a vision for what college sports can look like in the future.

And at some point, that’s going to evolve into some sort of compensation model for players — derived from the billions in television revenue. It’s only a matter of time before the pearls are unclutched. The question school presidents and conference commissioners need to ask is whether they want courts to force this — again — or if they finally want to craft their own future.

College presidents are mostly to blame for this leadership rut. They are part-time leaders of a billion-dollar organization that requires full-time engagement. They propped up outgoing NCAA president Mark Emmert for about a decade too long, with a tab that reached $4 million annually. That’s outrageous even by college sports’ standards.

So can the presidents redeem themselves and end the cycle? Sources say key presidents are engaged more than ever at the highest levels. They need to be.

Shouldn’t leaders want to make those decisions, instead of leaving them for judges and politicians?

Any long-term strategy needs to begin with the realization that a Sheboygan Brownie Troop leader has more power than the NCAA president. Recent NCAA leadership has devolved into praying for legal or congressional intervention as strategy.

The conferences need to take the lead. And the Power 5 leagues outside the Big Ten and SEC should be sounding the alarms in their conference offices daily to stress how much the revenue gap projections could undercut their future.

While all this NIL tail chasing is happening, the Big Ten and SEC are pulling so far away from their alleged peer power leagues so quickly that we appear poised for another seismic realignment shift soon because of the revenue gap. And the only reason people haven’t seen this coming is they are distracted by nonsense.

The smart leaders who aren’t in either of those two power leagues know they are soon going to be competing against schools that receive nearly double the annual revenue from their conferences. This is an unsustainable competitive model that’s destined to shake up college sports much sooner and more drastically than is being discussed right now.

“The solution is smaller units that don’t trigger antitrust,” said another prominent college leader, meaning wholesale decisions can’t be made for the country but rather made in smaller groupings. “I’m not sure it’s the way that we think of the conferences as units today.”

Forget shiny new facilities and weight rooms. The Big Ten and SEC should be finding ways to leverage revenues that project to be as much as double that of their peers in a few years to distance themselves on the field. The other power leagues should be using brain power to find creative ways to keep up. In the mid-2020s, Navigate Research projects that each Big Ten and SEC school will be making in the neighborhood of $100 million in league payouts and the next three leagues — ACC, Big 12 and Pac-12 — will be taking in about half that.

Projections are fickle, and specifics that far out are tricky. But even a $30 million gap annually — the most conservative of estimates — would be unsustainable competitively for big brands like USC, Oregon, Clemson and UNC.

Florida would never lose a recruit to Florida State if it could flex the inevitable financial superiority. Same for Ohio State going up against USC.

All those presidents don’t need their fancy degrees to agree that the talent acquisition model for a billion-dollar business should be more sophisticated than relying on outside collectives to recruit and retain players while pretending they aren’t. That’s essentially the business model right now for the talent — let a former star quarterback start an NFT fund to lure the next one. Or let the courts decide how the awkward outside model should work. This is all about as sustainable as retirement planning by betting red in roulette.

“Everyone is so stuck in what has been,” said another prominent official. “They struggle to see what could be. Everyone is so NIL focused, but it’s not the problem. It’s a symptom of the problem. The reason it has become what it’s become is because we have been suppressing the value of the marketplace.”

The presidents have to bury all the amateurism propaganda they’ve sprouted for decades and realize their days of talent-for-scholarship deals in college football and basketball have ended. Revenue sports are going to cost them more to run. They need to figure out a model to attract the best talent. The revenue streams are there.

So what’s the solution? Could it be schools or leagues buying every revenue athletes’ NIL for one rate while they are in school? Could it be siphoning off television money for a salary so every player at every school in a Power league gets paid? (Then they can get actual NIL on top of that — not the star-crossed current system — from there.)

Can this all be done creatively without athletes being deemed employees? And if they are, would that open up a whole new set of challenges considering this is all still awkwardly tied to an educational model?

It will be interesting to see if the Pac-12’s new television deal has some creativity to drive extra revenue to its biggest brands — USC, Oregon, UCLA and Washington — so they aren’t tempted to find more money in greener pastures. It will be just as interesting to see if new Pac-12 commissioner George Kliavkoff can find a creative way for the league to retain top talent out West.

The Pac-12 contract is coming up after the 2023 football season with a coinciding expiring grant of rights. It’s going to be a fascinating test case of what that league’s biggest brands — particularly USC — can command outside of the traditional contract.

Recently, Notre Dame athletic director Jack Swarbrick predicted to SI.com that some type of break off of Division I is “inevitable.” But that may actually come in the form of a pull-up instead of a breakup. Meaning, the programs with enough strength from the ACC, Pac-12 and Big 12 position themselves to join the highest revenue leagues.

SEC commissioner Greg Sankey has indicated he may be less willing to make concessions on the next College Football Playoff after a band of new commissioners scuttled years of expansion talks on the cusp of them coming to fruition. And while playoff talks take a pause, financial disparity gravity is a powerful flex of SEC leverage. Many have warned not to underestimate how ticked off Sankey is at the other leagues, who outside the Big Ten are increasingly going to need the revenue, exposure and lifeline of a national playoff.

Could the SEC take its ball and start its own postseason? Could they dare the Alliance to put together a playoff and play the winner? Holding hands and working together failed so far. And the individualization of leagues is going to forge the future of college athletics a lot more than someone in Indianapolis.

There are obstacles to breakaways — the educational component of college sports, Title IX and the billion-dollar NCAA tournament contract. That’s why revolutions and college leaders choosing the path are so important.

And why leaders need to focus on real issues, instead of the rhetorical cycle of the current system.